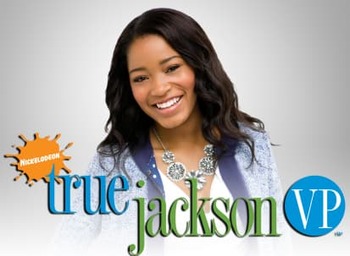 True must deal with all the trappings of the adult workplace; jealous co-workers, deadlines, regular meetings all on top of being a normal teenager attending school. And of course, since this a kids show, wacky hi-jinks ensue when both of her personal and professional life combine.

The show released its own de-fictionalized clothing line called "Mad Style by True Jackson", which was short-lived and discontinued not long after.

The show did alright for Nickelodeon, but apparently not up to the standards set by some of the bigger live-action shows on the network. Episodes also took awhile to air, as the show ended with 2 seasons and 60 episodes over about a three year period, probably due to Executive Meddling, progressively being Screwed by the Network, or that the two supporting actors were busy with other shows like Bucket and Skinner's Epic Adventures and The Troop.