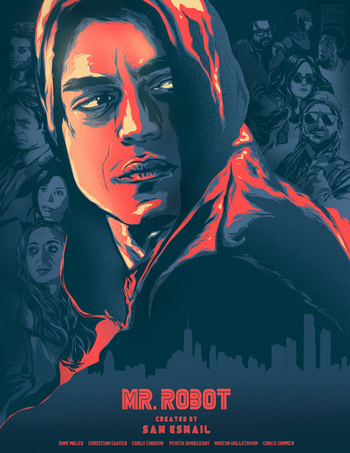 "Sometimes I dream of saving the world. Saving everyone from the invisible hand; one that brands us with an employee badge. The one that forces us to work for them. The one that controls us every day without us knowing it."
"What I'm about to tell you is top secret, a conspiracy bigger than all of us. There's a powerful group of people out there that are secretly running the world. I'm talking about the guys no one knows about, the guys that are invisible. The top one percent of the top one percent, the guys that play God without permission... and now I think they're following me."
— Elliot Alderson
Advertisement:

Mr. Robot is a USA Network original drama-thriller series created by Sam Esmail, starring Rami Malek and Christian Slater. Premiering on June 24, 2015, it ran for four seasons and concluded with a two-hour finale on December 22, 2019.

The series follows Elliot Alderson, a computer programmer who leads a double life as a hacker carrying out digital vigilantism. After discovering the existence of a secretive hacker group known as fsociety, Elliot gets recruited by their mysterious leader, Mr. Robot, and joins their digital war against E Corp, a Mega-Corp with whom Elliot has a personal grudge. He soon learns, however, that the economic revolution he's trying to spearhead may be larger than he ever imagined, and that other forces could be pulling the strings.

The show is a Pastiche of transgressive, postmodern works such as Fight Club, The Matrix, Twin Peaks, and American Psycho. The presentation of the show is likened to the eccentric styles of David Lynch, Stanley Kubrick, and Alfred Hitchcock, for its use of Genre-Busting direction, psychoanalytic motifs, dark visuals, and a distinctive cinematographic method known as "quadrant framing", creating a paranoid and detached perspective of the show's world. Mr. Robot also notably averts Hollywood Hacking by creating accurate, realistic depictions of hacking and technology.

The show has been spun off into a mobile game Mr. Robot:1.51exfiltrati0n.apk developed by Night School Studio and published by Telltale Games as well as a novel, Mr. Robot: Red Wheelbarrow (eps1.91_redwheelbarr0w.txt), written by Sam Esmail and Courtney Looney. A comic book prequel written by Sam Esmail was announced, but has since languished in Development Hell for unknown reasons.

We at fsociety have only sudo chopped the spoilers for the final season (4.0). If you want to experience the revolution for yourself, it is advised that you alt+f4 immediately!
Advertisement:

open/close all folders
Tropes A to G
Elliot: Nothing is actually impenetrable. A place like this says it is, and it's close, but people still built this place. And if you can hack the right person, all of the sudden you have a piece of powerful malware. People always make the best exploits. I've never found it hard to hack most people. If you listen to them, watch them, their vulnerabilities are like a neon sign screwed into their heads.
Tropes H to M
Tropes N to T
Tropes U to Z
"...so, this is what a revolution looks like."
Feedback