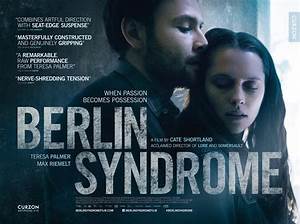 Berlin Syndrome is a 2017 film which starts as the Australian tourist Clare visits Berlin, Germany. There she meets Andi, who's a charming, attractive German man, and they hit it off. While at first everything seems fine, after Clare has sex with him, she finds Andi's left the next day with the door locked from the outside. He apologizes and claims it was a mistake after coming back from work, saying he'll give her a key there so Clare won't be trapped inside again. The next day though, the key that Andi promised he'd leave is nowhere to be found. Clare realized in horror that Andi intends to lock her inside his apartment indefinitely. Her attempts to escape are futile-the window glass is reinforced, the door still locked. With increasing desperation, Clare struggles for a way to break free... The film stars Teresa Palmer and Max Riemelt. It's based on a novel by Melanie Joosten with the same name, published in 2012.