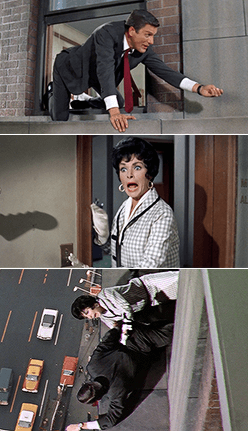 A character is standing on a ledge or behaving in a somber manner when someone else notices them. The person starts worrying that the other person is going to try and kill themself, but it turns out it's Not What It Looks Like. This trope is Played for Laughs just as often as it's Played for Drama. It may result in an Unwanted Rescue.

This occuring between two strangers often turns into a Meet Cute: One mistakes the other for trying to kill themselves, helps them, learns that the other was just fine, and they spark a bond.

Compare to Interrupted Suicide, which is when someone is actually stopped from committing suicide, Mistaken for Brooding, for when a character thinks someone is sad but not suicidal, and Make It Look Like an Accident, which can result in the murderer trying to make a murder seem like a suicide. This can occur if a character looks like they're having a Prelude to Suicide.