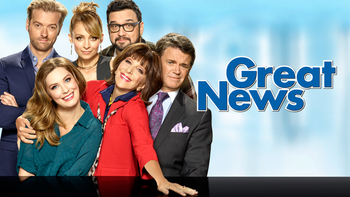 Great News is a television sitcom created by Tracy Wigfield which premiered on NBC in April 2017.

Katie (Briga Heelan) is a producer at The Breakdown, a national news program that broadcasts out of Secaucus, NJ. Katie is frustrated because the bosses at her show give her fluff pieces instead of the hard news she wants to do. She's also frustrated by her helicopter mom Carol (Andrea Martin, of SCTV fame), who is continually calling Katie and inserting herself in Katie's life. So she's even more frustrated when her mother, looking for something to do as she approaches her golden years, gets herself a job as an intern on Katie's show.

Nicole Richie and John Michael Higgins play Portia and Chuck, the co-anchors of The Breakdown. Adam Campbell is Greg, the harried executive producer of the show, who has a Will They or Won't They? thing going with Katie. Horatio Sanz is Justin, the genial control room editor.

Great News was cancelled in May 2018 after a two-season run.