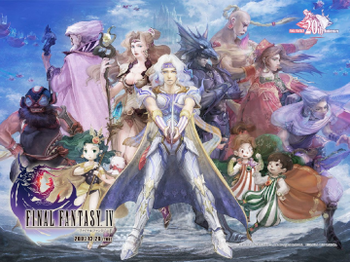 The cast of Final Fantasy IV circa the DS release. Spoony Bard included for free!
Birthed from womb of dragon's maw
And borne unto the stars
By light and darkness cast aloft
Are dreamtide oaths resworn
Moon is swathed in ever-light
Ne'er again to know eclipse
Earth, with hallow'd bounty reconciled

Yet fleeting is the reverie
When moon from shadow has egressed
Guided forth anew by light made manifest
Two bound by ties of blood
Advertisement:
By Time and Fate are wrest apart
Unto lunar light and Gaian breast
— The Mysidian Legend (DS Edition)

Final Fantasy IV, the fourth entry in the face-meltingly popular Final Fantasy game series and the first 16-bit game in the series, released in 1991 for the Super Nintendo Entertainment System.

The main character of this tale is Cecil, a Dark Knight in the service of the King of Baron. After questioning the recent warmongering of his king, he is demoted to errand boy and sent to a village called Mist in order to deliver a package and slay a dragon menacing its borders. He is joined by his best friend and rival, a Dragoon named Kain. Once they reach the village, they discover that nothing is quite what they have been told: they have been used as disposable pawns in Baron's ongoing crusade to capture the Power Crystals that exist around the world. Cecil vows to stop the evil intentions of Baron, but first he must atone for the sins that he committed in its service and overcome his own inner darkness.

Received a cellphone sequel called The After Years (also available on WiiWare and the PlayStation Portable), which stars the old cast and some of their children teaming up again to prevent the same catastrophe from happening again. It, along with Final Fantasy IV itself, was released on the PSP in March 2011 in Japan and April everywhere else. Also includes a midquel called Interlude to connect the plots better. Both games use new graphics and is the largest 2D graphical change to the original other than the cellphone version. This version is heavily based on the Game Boy Advance version, and the only thing taken from the Nintendo DS version is the translation of terms (e.g. Carnellian Signet rather than "Bomb Ring").

Final Fantasy IV is the title that had the most impact on the direction the franchise went in, and it had an enormous influence on virtually every one of its descendants, not to mention on role-playing games in Japan in general. It's been remade/ported numerous times. In addition to being half of the Final Fantasy Chronicles compilation on the PlayStation, FFIV has been ported to the GBA, and was the second game (after Final Fantasy III, which didn't make it over beforehand) to be remade with 3D graphics on the Nintendo DS (this version was ported to PC in 2014). It's also the first remake to add voice acting, if only for key scenes. A 2D remaster, created as a part of the Final Fantasy Pixel Remaster series and largely based on the previous GBA and PSP rereleases (excluding any new content those versions added), was released for Steam and mobile devices in September of 2021.

>Magic > Flame
"Poor technique. This is how it's done."