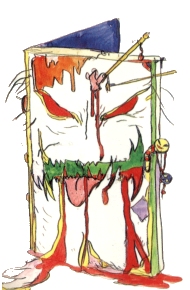 Pictured: the Trap Door, the only enemy in the game that is... well, a simple door. Artwork by Yoshitaka Amano, hence the (added) scariness.

The main article for the Nightmare Fuel found in the Final Fantasy series states that somewhere in the franchise's history, all of the pants-crappingly scary stuff, which started as something occasional, became the norm.

Given this is the first game in the series to get its own NF page, we think it's safe to say this is exactly where shit hit the fan. Final Fantasy V is a Lighter and Softer sequel, but it has its own fair share of frights.