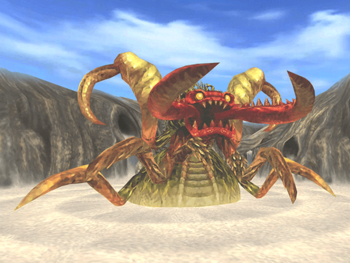 Maybe it's tame.
The Antlion Monster is usually found in the Shifting Sand Land waiting for its prey at the bottom of a pit, with only its mouthparts visible until it emerges for battle.
Advertisement:

The inspiration for most of these is the larva of the antlion,

which digs out a hole and waits for food to come tumbling down. (It's not an ant, by the way: it's so named because it preys on ants.)

Do not confuse with the mythical Myrmecoleon

: as a result of a translation error, it's the offspring of a lion and an ant that's doomed to starve as one parent eats meat and the other eats plants.

See also Sand Worm and Pit Trap, which this can be considered a combination of.