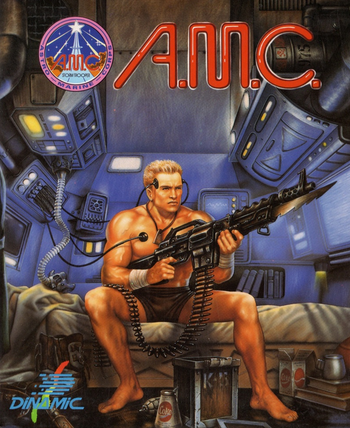 Astro Marine Corps, or A.M.C., is a Platform Game developed by Creepsoft for the Spanish publisher Dinamic. Originally released in 1989 for the Amstrad CPC, ZX Spectrum and MSX (all these versions proudly featured 16-color graphics and parallax scrolling), it was subsequently ported to the Commodore 64, Amiga and Atari ST.
Advertisement:

As is typical for a Dinamic game, A.M.C. is divided into two missions. The first mission has you, as an A.M.C. trooper, fighting the Deathbringers on the planet Dendar to reach their ship. In the second mission, you take the fight to the Deathbringers' homeworld and kill the Great Alien King.

Tropes included in this game: