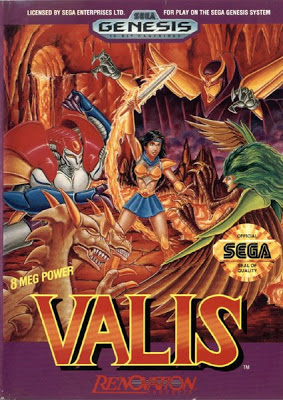 Mugen Senshi Valis (aka Valis: The Fantasm Soldier or simply Valis), a series of anime-style platform games by Telenet Japan:

In the first game, we are introduced to the main character, Yuko Ahso. She was an Ordinary High-School Student, who had just gotten into a fight with her best friend, Reiko one day, when the armies of the Dark World invaded Earth and the Dreamland, the three of which are parallel to each other. Upon discovering this, she was given the Valis sword by Valia, Queen of Dreamland, and told of her heroic destiny. As The Chosen One, Yuko must save Dreamland and Earth from the forces of evil. Reiko, unfortunately, has fallen in love with Rogles, who is head of the DarkWorld army, and so she also opposes Yuko in her quest.

Stretched out over four games, the series traces Yuko's adventures and tribulations, gradually gaining some depth but ultimately unable to escape the criticism for existing merely for the purpose of showing "hot anime chicks in bikinis and schoolgirl outfits destroying things."

Not to be confused with the semi-autobiographical novel by Philip K. Dick, which you can find here.

Later on, on December 2020, a new website commemorating the game's 35th anniversary was created

In celebration of this anniversary, a special edition containing Valis I-III will be rereleased for

Now has a character page (under construction)