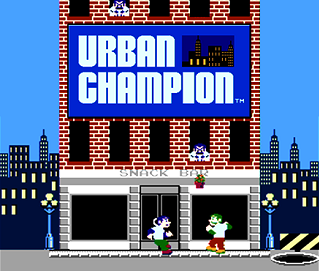 Urban Champion is an NES fighting game released in 1984 in Japan and 1986 elsewhere. The concept of the game is to beat the opponent in a street brawl three times before knocking him into a sewer manhole. It was later re-released on the e-Reader and the Wii Virtual Console.

A 3D remake for the game is available for the Nintendo 3DS. There were some improvements, such as a 3D camera option, as well as listing the player's current rank and a save option.