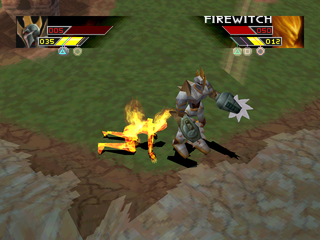 Firewitch vs. Razorfane, The Magic Versus Technology War at its finest.
Advertisement:

The Unholy War is a PlayStation game that combines fast-paced fighting and turn-based strategy. It was developed by Toys for Bob (the same developers as Star Control, The Horde, and Skylanders), published by Eidos Interactive, and released in 1998. The Unholy War is a full-3D polygonal game, something that was quite new and experimental back then.

In fighting mode, the game is more akin to a Platform Fighter, since the characters are free to move on the map and are not obligated to face each other the whole time.note See Ehrgeiz for a game with similar fighting mechanics. Strategy mode is a combination of Age of Empires (since you must extract resources and create troops) and Archon, Mortal Kombat: Deception's "Chess Kombat" or Soulcalibur III's "Chronicles of the Sword", where the collision of pieces triggers a battle (in fighting mode) between them.

The story of the game is about two alien factions who hate each other to death, and of course, are in war. One is called Arcane and the other Teknos, the former being the natives and very fantasy-like creatures, and the latter being high-tech humanoids. The Teknos are trying to exploit the resources of the planets and, of course, the Arcane are not happy about it... one decade later, that sounds somehow familiar.

The fights are made between sides (not between single characters, since they are all generic individuals from a species), and each species is strong against something, and weak against another thing. It's quite an original twist from the usual Fighting Game formula, since it's faction-centered and not character-centered. For tropes about each unit see the characters' page.

The Unholy War contains examples of the following tropes: