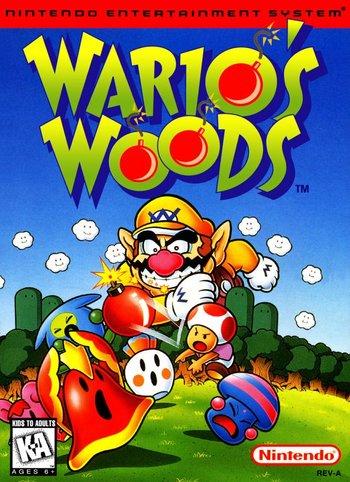 Wario's Woods is a video game in the Super Mario Bros. franchise, released for both the NES and SNES in 1994.

Once upon a time, the Peaceful Woods was a peaceful home for sprites and other friendly creatures, until one day, when the evil Wario and his followers used their magic powers to take over the woods, and Wario names the woods after himself. With neither Mario or Luigi anywhere to be found, Toad finds himself forced to step up to stop Wario and his followers from ruining the serenity of these woods by using bombs provided by the sprites.

In-game, the player controls Toad as he moves around monsters in the playfield and eliminates them by placing bombs next to vertical, horizontal, or diagonal rows of monsters that match the color of the bomb being used.

Both versions of the game have the following game modes:

The NES version of the game was the last first-party game to be released for that console, and was released so late in the console's lifespan that it is also the only NES game to have an official ESRB rating.

In 2012, the game was adapted for the 3DS touchscreen and included as a minigame in Brain Age: Concentration Training, under the name Blob Blast. This version was largely based on NES version and only included the Round Game mode. Instead of controlling Toad, the player could manipulate bombs and blobs (monsters) directly using the touchscreen, similar to Virus Buster and Planet Puzzle League.