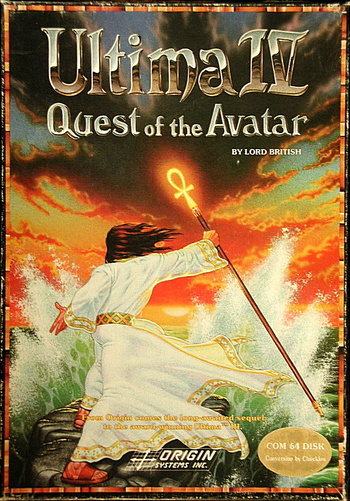 The beginning of something truly excellent.
A new age is upon Britannia. The great evil Lords are gone but our people lack direction and purpose in their lives. A champion of Virtue is called for. Thou may be this champion, but only time shall tell.
—Lord British
Advertisement:

Ultima IV: Quest of the Avatar was a 1985 video game, the fourth installment of the legendary Ultima series by Origin Systems. No one can deny that Ultima IV was a masterpiece (even if modern gamers are likely to wrestle, at best, with the interface) that took the still-nascent concept of the "role-playing video game" and turned it completely on its ear in a way that, even decades later, still hasn't really been replicated, but has informed virtually every Western-made role-playing game that came after it.

In the Magical Land of Britannia... all of the Big Bads are dead. The evil wizard Mondain is dead. His apprentice Minax is dead. Their child/demon/computer... thing, Exodus... was destroyed. Yet even with No Antagonist to fight, there remains a lack of virtue in the hearts of men. Britannia needs a new kind of hero - one who is more than merely a champion against evil.

To this end, the magical ruler of Britannia, Lord British, summons the Stranger of old who defeated those evils for a very different task: Become the Champion of Virtue and set an example for the common man; master the Eight Virtues and be worthy to read the The Codex of Wisdom, located in The Great Stygian Abyss; fulfill the Quest of The Avatar.

A freeware version was distributed on the Internet in 1997. In 2011 Electronic Arts began issuing C&D orders to people distributing it after 14 years of salutary neglect. This has caused some concern in the community, but the game remains legally free on Good Old Games

and should be played by anyone with even a passing interest in role-playing games.

In 2013, EA released Ultima Forever: Quest for the Avatar, a free-to-play MMORPG re-imagining of the game on iOS mobile devices, shut down in August, 2014.

Ultima Forever: Quest for the Avatar provides examples of the following tropes: