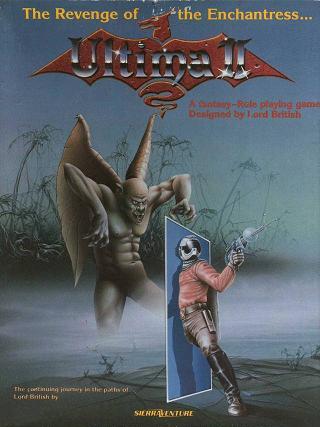 "Traverse deep dark deadly dungeons
And tall terrifying towers
Travel throughout the galaxy
To the planets of our solar system
And conquer time itself to battle
Minax the Enchantress"
Advertisement:

Ultima II, first released in 1982, is the second game in the Ultima series.

Minax, the apprentice and lover of Mondain, is a bit ticked off that some Stranger from another dimension killed her mentor. Utilizing time gates opened in the wake of Mondain's death, Minax travels back to The Time of Legends and builds a new army, which she uses to take over Earth. Once again, Lord British (who's escaped to Earth from Sosaria) summons The Stranger, who must travel throughout time and space to save the Solar System from Minax's evil. (Later games Retcon this, stating that the events of the game took place entirely in Sosaria, the world of the previous game.)

Ultima II is similar to its predecessor, though it takes the Schizo Tech element up to eleven, and was originally programmed in machine language rather than BASIC. The gameplay world is vast and detailed, though much of it is only for decoration and not required to complete the game. It also started a tradition of including Feelies in the box, in this case a cloth map of the various time doors.

Alternative Title(s): Ultima II The Revenge Of The Enchantress