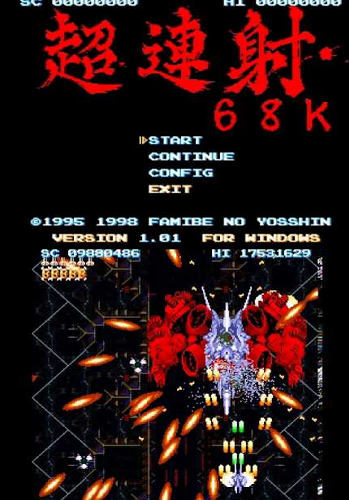 Cho Ren Sha 68k (超連射68K, lit. "Super Rapid Fire 68K") is a 1995 Shoot 'em Up by Famibe no Yosshin that will take you back to the classic era of shoot 'em ups. Back to a simpler time where shooters didn't needed a complex plot or an engrossing story to be fun; just simple graphics, catchy chiptune music, simple to understand yet fun gameplay, a desire to destroy all sorts of enemy spaceships, and LOTS of bullets.

You take control of a space fighter armed only with an upgradable spread shot and a handful of screen-clearing bombs to take on the onslaught of enemies and bullets that come in your way. There are also triangular power-ups where you choose one of three items that can either boost your ship's firepower, refill your bomb stock, or a one-time shield that saves you from harm while ditching the other two. If you know the trick, however, you snag all three power-ups at once.

Cho Ren Sha 68k was made for the Sharp X68000 Japanese computer system, but there is also a freeware version available for Windows PC. You can find the downloads here