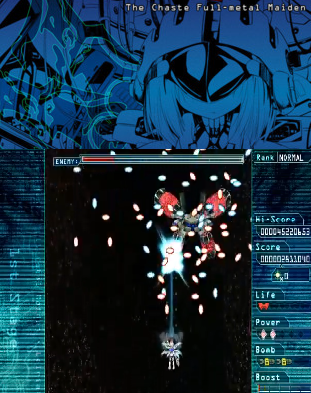 The title screen & an early boss.
The Chaste Full-metal Maiden -Leiria- is a freeware doujin Shoot 'em Up game, released by NonLinear for PC in 2009. In this game, players take control of the titular character, a Robot Girl named Leiria created by Joshua, a technician and one of the only surviving humans of a space colony incident. The game features a proximity-based scoring system, similar to CAVE's Ketsui, and near-seamless transitions from one stage to the next. Originally released as a retail game at Comiket, it later became a freeware title.
Advertisement:

In August of 2011, the game received a remake with Leiria -Stargazer-, where the gameplay follows the lines of the Espgaluda series, while offering a retelling of the game's original story. Roughly a year later, said game went from a retail doujin game to a freeware game, just like its predecessor.

The original game can be downloaded here

), and its remake can be found here

This series features trope examples of: