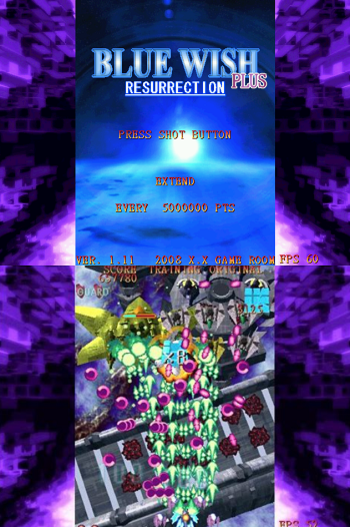 The menu, and one of the stages.
Blue Wish Resurrection is a doujin freeware vertical-scrolling Bullet Hell Shoot 'Em Up developed by x.x. Game Room and released in 2006. It is the sequel to Blue Wish.
Advertisement:

The gameplay is your typical bread-and-butter Bullet Hell game, with three levels of difficulty (Heaven, Original, and Hell) and two different ships, Blue Wish and Blue Hope. An additional ship, Blue Peace, can be unlocked by completing Heaven difficulty or higher on one credit.

However, BWR is a bit on the Nintendo Hard side, being a Bullet Hell shooter with no slowdown whatsoever, meaning that you have to dodge everything at full speed even if there are more bullets on screen than there is empty space.

A second version of the game, Blue Wish Resurrection Plus, was released in 2008 and features all ships available to play as well as the Eden's Edge, a new soundtrack, and Palette Swaps of the five stages. It also has a number of adjustments that make it easier for new players, such as more extends and deliberate slowdown when there are excessive bullets on screen. As such, some players have taken to calling it a good beginner's shmup.

A sequel, Blue Wish Desire, was released in October 2021 on x.x.'s Booth page

. It will also be released for Steam in November 2021.