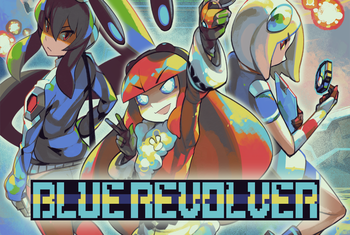 "Ever feel like the world doesn't understand your talents?"
Advertisement:

BLUE REVOLVER is a Vertical Scrolling Shooter developed and published by the group Stellar Circle, released internationally for Windows, macOS X, and Linux on October 11, 2016.

The game takes place in a world where magic can be analyzed and used to create various things, albeit at the cost of excess "junk data" materializing and posing a hazard to the environment, requiring safety laws to be put in place to regulate it. Specialists called "technicians" are often sent out to locate and negate potential data anomalies and are in high demand, with the most notable group being the titular Blue Revolver, famous for their Devices, remote control-like objects that allow them to channel complex AI scripts into machines. The story follows Mae, an Insufferable Genius rabbit-eared girl whose home-made Device (which was obviously not made under laws and regulations) creates a particularly large anomaly that catches the attention of Blue Revolver, who respond by sending out an army to take her in and resolve the incident. Mae however doesn't take it too well and responds by launching a counter-attack of her own, kicking off the plot.

The game's basic format follows that of your typical Bullet Hell shooter: you can choose between two characters and their respective ships, each of which has three shot types and four special attack types, and there are three difficulty levels for players of varying skill levels in which the goal is to clear the game's five stages, ideally on one credit. The core scoring gimmick is the "Flourish" system, in which the player builds up hit chains and then cashes the resulting multipliers in with their special attack. In addition to the usual arcade and stage select modes, there is also a mission mode where you are assigned a specific ship/stage/difficulty configuration and must complete objectives like scoring x points and reaching the end of the stage without dying.

The game can be purchased on itch.io here

and on Steam here

.note Purchasing the game on itch gives a bigger cut of the revenue to the developers and provides both a DRM-free copy and a Steam key.A demo can be downloaded in itch.io here

. It will be free of charge to players who already own the original "White Label" version. It was initially scheduled for a January 2018 release, but has been delayed and remains in development with no updated release date confirmed, although in the meantime the developers released the soundtrack to Double Action and put out an update to the existing vanilla edition of the game that adds said soundtrack in July 2020.

There's a very good reason why the "Nothing I Could Do" achievement, unlocked by doing this boss with no deaths or bombs, is unlocked by only 0.1% of all players.

There's a very good reason why the "Nothing I Could Do" achievement, unlocked by doing this boss with no deaths or bombs, is unlocked by only 0.1% of all players.