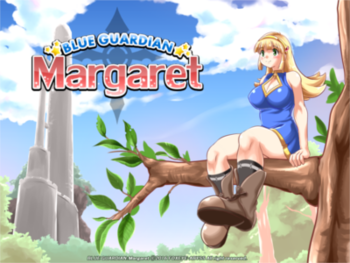 Behold! The protector of the Water Deity's tower! Or she was supposed to be, anyway...
Advertisement:

BLUE GUARDIAN: Margaret is an Action-Adventure Metroidvania for PC, created by underwater-themed Doujin Soft developer Fox Eye in 2016, who have also made fellow Metroidvanias Holdover and Sacrifice Girl. This is the first game made under the "R-15" (or 18+) Fox Eye ABYSS label.

In this game, you play as the titular Margaret, an easygoing, carefree girl with a lot of spirit, but no skills in martial arts nor magic, so she relies on two magic pistols, instead. She was ordered by the heavens to protect the "Tower of the Water Deity", but she's been slacking off from that for years and left the tower unguarded, causing a whole slew of monsters to invade the tower and pollute its water, threatening human civilization and angering the gods as a result.

Apollo, the son of the almighty god Zeus who runs communications between guardians and gods, orders Margaret to fix her mistake by traveling through the tower, eliminating the monsters and finding the source of all of the water pollution, all while taking care not to drown in the tower's flooded areas, or get murdered or even molested by the monsters that await her. Margaret will also have to protect the Holy Knights Survey Corp soldiers that decided to investigate the tower on their own in her absence, but Lancer, the leader of the soldiers, may have something else planned in mind...

Wielding the Fox Eye ABYSS label, BLUE GUARDIAN: Margaret is known to be much more adult-oriented compared to every previous game Fox Eye has ever made. Barbie Doll Anatomy is completely averted for Margaret's bared breasts after suffering Clothing Damage, and besides the developer's traditional Oxygen Meter, Margaret also has a twisted form of Level-Up at Intimacy 5 in her Excitement Meter, where it rises if certain monsters manage to catch and sexually assault her. It also goes up on its own the less clothes she wears. Achieving a critically high state of arousal turns Margaret into a Glass Cannon where she can deal more damage at the cost of taking more damage and losing her breath faster underwater.

Info on the game can be found on its website

. Both Japanese and English versions of the game can be purchased from the Mature/R18 section of DLsite.