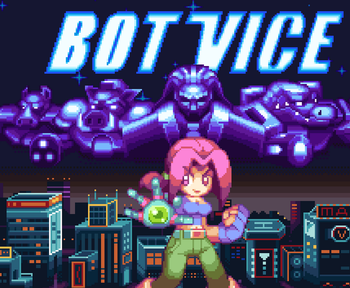 Bot Vice is an indie video game developed by DYA Games, and released on Steam in July 2016 here

, and was also ported to Nintendo Switch in April 2019.
Advertisement:

It is a shooting game with 16-bit style pixel art visuals, where each stage consists of one screen that needs to be cleared of enemy waves. The player is located at the bottom of the screen, and can only move left and right, while doing dodge rolls and taking cover. The story is about Erin Saver, a former police officer who lost her partner and her arm to a criminal gang Wildbots, and is now on her Roaring Rampage of Revenge.