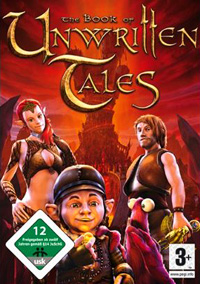 "I have the feeling a being of great knowledge controls all of my actions."
— Wilbur Wetterquarznote Actually, the Fourth Wall is still pretty much intact there. But they get to it.
Advertisement:

The Book of Unwritten Tales is a 2009 Point-and-Click Game developed by German studio King Art Games and published by HMH Interactive. It was localized for English audiences by The Adventure Company in 2011, after years of waiting. For the most part, it would have been your average Adventure Game, if it was not constantly referencing this very fact. Most of the game's humour originates from this and the weird logic applied in many games of the genre.

The story starts off in times of a big war with Gremlin archaeologist Mortimer MacGuffin (yes, the game starts there already) being attacked by the servants of the evil witch most often referred to as "Mother". She is after a mysterious artifact granting its owner the ability to make all his wishes come true. In order to stop her, over the course of the game, the player controls various characters to solve different puzzles.

The game leads through a big fantasy city filled with millions of magical creatures, a sunken temple, the wild lands occupied by horrible creatures and the heart of the evil kingdom itself.

A prequel titled The Book of Unwritten Tales: The Critter Chronicles has been released in Germany in October 2011. As the title suggests, the main characters in this game are Critter and Captain Nate. The international version was released in Spring 2012.

A sequel called The Book of Unwritten Tales 2 was released in 2015 for Steam and Wii U.