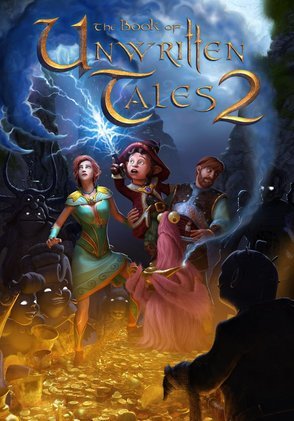 "Do you remember the story of the Nothing? A great blackness that slowly engulfed a fairy kingdom? This time it is worse. It is... pink.."
— The Elf Queen
Advertisement:

The Book of Unwritten Tales 2 is a comedy point-and-click adventure video game created by the German developer King Art Games and released on 20 February 2015.

The story is a sequel and takes place a year after the events of The Book of Unwritten Tales. The four heroes of the original game have each returned to their normal lives: Princess Ivodora is passing her days in the Elf Burrow trying to fend off the suitors arranged by her mother but feeling increasingly ill, Wilbur has become the only teacher in Seastone's recently reappeared magic school and is worried about the upcoming election, and Nate and Critter are back to being treasure hunters, with all the mishaps corresponding to the trade. The peaceful course of things comes to a halt when each of the heroes are confronted with strange events which threaten the stability of the realm and the safety of everyone in it.

Unwilling to let things stay as they are, they each begin to search for the threads of the plot that will eventually bring them all back together.