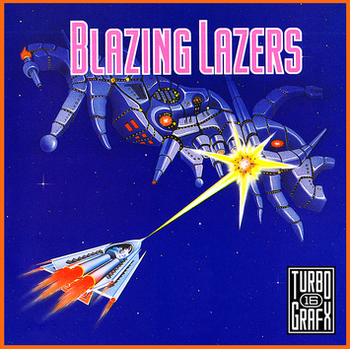 Blazing Lazers is a 1989 Vertical Scrolling Shooter for the TurboGrafx-16, produced by Hudson Soft and developed by Compile (whose name only appears in the game's end credits as "cooperator"). In Japan it was titled Gunhed, and was a tie-in to a movie of the same name; however, the game and movie barely resemble each other.
Advertisement:

The game has nine variously space-themed stages which are slightly wider than the screen.

Four weapon types are available, each of which can be upgraded by collecting purple orbs and items which give additional firepower.