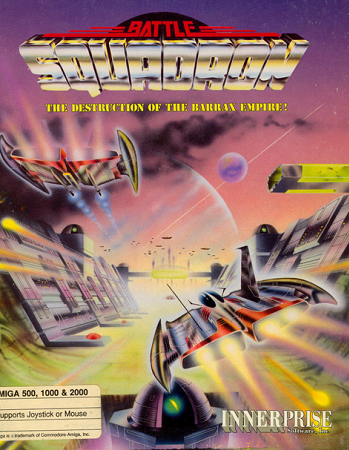 Battle Squadron: The Destruction of the Barrax Empire casts the player (or players, thanks to the two-player co-op mode) in a role of a pilot (or pilots) sent to rescue two human commanders held captive by the evil Barrax Empire. Data indicates that they are held on the planet Terrainia, which is predictably full of enemies... literally since it's apparently hollow inside.
Advertisement:

The plot is obviously simple. But that's okay, since it's just an excuse to put the player through four completely different levels of total mayhem.

Released in 1989 for Amiga and in 1990 for Sega Genesis, Battle Squadron is a Shoot'em Up that features some incredibly beautiful and advanced graphics for its time. Explosions, bullets, spaceships, scenery, everything is hand-drawn and carefully animated, the sound effects and the background music are also very memorable. Thanks to some creative coding, the authors even managed to include a unique "Predator" invisibility effect for some of its enemies. Despite its relatively slow - although adjustable to a degree, thanks to a hidden menu - pace it remains very much Nintendo Hard, like many shooters of the era. Later received a somewhat inferior port to Sega Genesis and another, improved one, to Android and iOS.