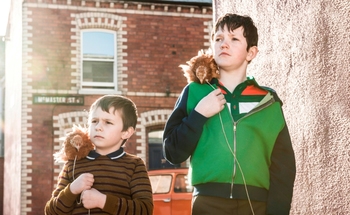 Boogaloo and Graham is a 2014 short film (14 minutes) directed by Michael Lennox.

Belfast, Northern Ireland, 1978—The Troubles are in full swing, with soldiers roaming the streets. But in the midst of the violence domestic life goes on. Two little boys, brothers Jamesy and Malachy, receive baby chickens as pets from their sporadically employed father (Martin McCann). Their mother (Charlene McKenna) is not very enthusiastic about having chickens in the home, but the boys love them, and they raise the birds from baby chicks to full-grown chickens. But when Mom gets pregnant again, she insists that the chickens have to go.