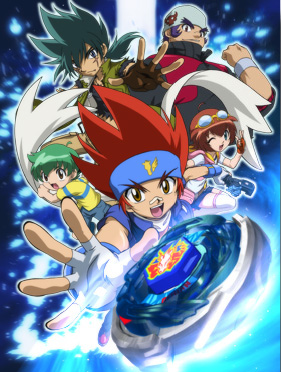 Metal Fight Beyblade (known in the West as Beyblade: Metal Fusion) is the second incarnation of the Beyblade franchise and co-produced by the company that dubs it, Nelvana. It's the story of Ginga Hagane, an apparent drifter with no home. One day, he rescues a boy named Kenta Yumiya from some members of the Face Hunters gang and the pair bond under the stars. The next day, Ginga's cornered by the entire Face Hunters gang and defeats them all. Then he has to go up against their leader Kyoya Tategami...

The second season, known as Metal Fight Beyblade: Explosion! in Japan and Beyblade: Metal Masters in the West, premiered on the U.S. Cartoon Network on August 20, 2011. In this season, Ginga forms a competitive team with Tsubasa, Yu and newcomer Masamune, as they prepare to take on the world tournament.

The third season is called Metal Fight Beyblade 4-D or Beyblade: Metal Fury. A star arrives on Earth and breaks into 10 pieces, which assimilate with certain Beyblades. The Bladers who wield them are known as Legendary Bladers and Ginga, Kyoya and Ryuga are part of this group, along with many new characters. They have the mission of fighting the Nemesis Bladers, who want to destroy the world.

There is also a movie called Metal Fight Beyblade VS The Sun: Sol Blaze The Scorching Hot Invader, which premiered in Summer 2010, when the second season was airing in Japan. In it, Ginga and co. are enjoying the Summer when a Blader working for a group of people who claim to be the descendants of the inhabitants of Atlantida appears and defeats everyone with a mighty sun-based Beyblade. Ginga and everybody else have to stop his master's plans of destroying the world.

Metal Fight Beyblade Zero-G or Beyblade: Shogun Steel is a sequel that takes place several years after this trilogy and focuses on a new generation of characters, though old characters do show up a lot and have a role to play. Please place any tropes referring to it in that page, not here.