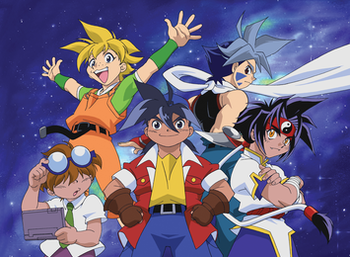 Bakuten Shoot Beyblade (爆転シュートベイブレード)note "Bakuten" is a neologism, combining 爆 for "explosion" and 転 for "(rotational) movement". "Spinsplosion" works as a translation. aired from 2001 to 2003 with a season each year in Japan. American audiences got their share of Beyblade from 2002 to 2005. The first season was produced by Madhouse and the last two were done by Nihon Animedia, with some outsourcing to Synergy. The story was adapted from the manga by Takao Aoki, which itself was a reboot of the events told about in Jisedai Beigoma Battle Beyblade. Also included in the anime lineup is the Non-Serial Movie Beyblade: The Movie - Fierce Battle, which can be considered an Alternate Continuity to the third season.

The first season narrates how the protagonists, the BBA Team, rise to the top. It starts out on neighborhood level, with a local gang of beyblading bullies terrorizing Akebono, moves to the Japanese Tournament where the protagonists become a team, then enters a series of tournaments, and finishes with the BBA being the world's last chance against a hostile takeover by Borg and Hiwatari Enterprises. Along the way, each member of the team faces a personal demon and grows both as a person and as a teammate.

Season 2 (2002 in Japan, V-Force elsewhere) shifts gears, moving largely away from the tournament narrative to provide a story of the BBA Team having to defend their four sacred bit-beasts — Dragoon, Draciel, Dranzer, and Driger — from two organizations trying to steal them: the Saint Seals and Zagāto Industries, which are at odds with each other too. The BBA Team's numbers increase with the addition of Hiromi, who provides support to the team alongside Kyōju.

Beyblade: The Movie - Fierce Battle follows on Season 2, but cannot lead into Season 3 on account that Daichi has his introduction in both of them. The movie sees the BBA Team travel to Kyushu for a tournament and to spend a few days on vacation. However, on a nearby island a group of four children accidentally set the Four Holy Beasts of Darkness free and it's up to the BBA to save the world from the creatures' wrath.

Season 3 (G-Revolution) returns to the tournament-heavy format, but with one major twist: the BBA Team is no longer together. Max, Rei, and Kai all go to their alternative teams for their own shot at becoming the world champion. This leaves Takao to join forces with season-newcomer Daichi and his bit-beast Gaia Dragoon. The former teammates face off against each other in various rounds, but ultimately become allies again for another effort to stop the world from being taken over.

The differences between the anime and the manga are significant and plentiful. Firstly, the flow of time is different. Where in the manga everything happens within one year, each season of the anime represents a year, making for three years total. To this end, the length and amount of battles got vastly upped: the manga features a one-battle-only mode while the anime uses a best-out-of-three setup. Furthermore, in the manga, many of the team-type bladers are bodies at best whereas the anime fleshes out as many characters as it can. One important thing to note is that the manga and anime were in part produced concurrently and Aoki did do work for the anime too. This means that on occasion it's the manga which is the adaptation rather than the other way around.

Much like other localized kid-oriented anime of the time, the English version of Beyblade was given a number of changes including Western names for characters, the character Dizzi's very existence, music adjustments, and removal of certain parts of the show that wouldn't fly on U.S. TV. The anime was licensed by Nelvana.