Lying on a Hillside 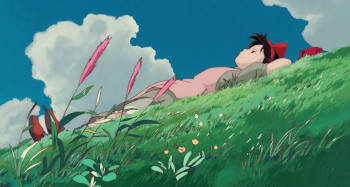 "How many times have you sat in the grass and done nothing?"
— Mrs. Tanner, Scrubs, "My Old Lady"
Advertisement:

When a show needs a moment to pause and reflect on the fleeting joy and serenity of friendship, particularly right before things all go to hell, a small group of friends — sometimes two, but more usually three — will find themselves sitting on a grassy hillside on a bright sunny day. As they talk of the important issues in their lives, they will flop back and look directly up into the sky with arms, legs and hair spread out around them. The camera emphasizes the moment by taking to the air and shooting straight down to show the friends lying together on the hillside. Artificial riverbanks are useful for this purpose.

Compare with Sitting on the Roof, when you need to get away from it all.

Alternative Title(s): Laying On A Hillside