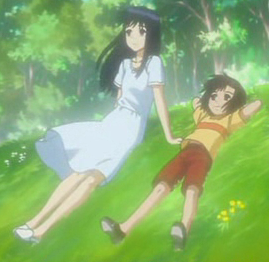 High-school student Shizuru and her little sister Mizuki have special gifts: Shizuru can see ghosts and Mizuki can be haunted by them. They were placed with their grandparents in the countryside of Japan, since their grandfather knows all about the spiritual beings the girls have to deal with. The two girls are very close and try to help each other whenever they can, which is very necessary given the weirdness that befalls them.

Mokke has a very easy-going pace and a Slice of Life feel to it. The spirits that the two girls encounter are generally based on Japanese folk tales and usually not malignant, although often very obnoxious and persistent. The confrontations with those spirits can often get very intense, especially for poor Mizuki, since she has to bear the brunt of their hauntings.

The manga is often compared to Mushishi and Natsume's Book of Friends, series about supernatural beings that can only be seen and affected by certain persons. Mokke is much more character-driven though and the spirits often function as means to teach the two sisters lessons about life, although even that is kept very low profile in favor of the more day-to-day experiences of the characters.

An anime adaptation was made in 2007 by Madhouse and Tezuka Productions.