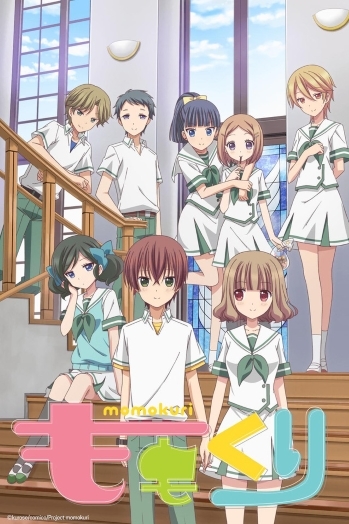 Yuki Kurihara is an energetic, friendly highschool student who also happens to be a Stalker with a Crush for her classmate Shinya "Momo" Momotsuki. He's a shorter-than-average boy who's embarassed by the way his friends treat him as "cute", wishing he could be cool instead. After taking 100 surreptitious cell phone pictures of Momo, Kurihara works up the courage to confess to him, and he agrees to go out with her! But unbeknownst to him, Kurihara continues to take secret pictures of Momo and collect any objects he's touched or used, despite the fact that whenever they're together she gets embarassed just as easily as he does.

Momokuri (ももくり) is a full-color Romantic Comedy web manga written and illustrated by Kurose, and published by NHN. Its original run was January 10, 2014 – December 29, 2016. An original net anime adaptation by Satelight was released on the Comico app from December 2015 to February 2016, and a television broadcast of the anime began on July 1, 2016 on Tokyo MX. Both the manga

are available on Crunchyroll.