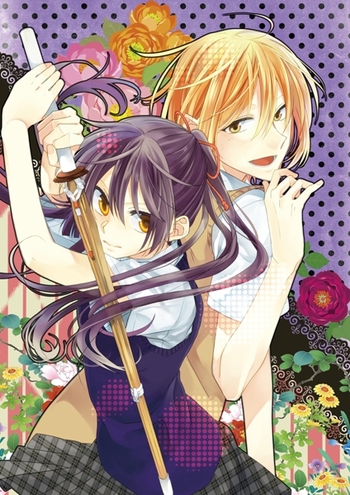 Mizutama Honey Boy (meaning "Polka Dot Honey Boy") is a manga by Junko Ike which tells the story of Mei Sengoku, the captain of the girls' kendo team and the school's resident "samurai," and Shiro Fuji, the boy who's crushing on her and known as the school's "girly guy." When Fuji confesses to Sengoku, she deems it a distraction from her goal of becoming stronger and rejects him. But when Fuji saves her from danger, she finds herself wanting to get to know him more in hopes of understanding her weaknesses.

Thus begins their unusual friendship and zany day-to-day adventures. As the two become closer, Sengoku begins to open up to a bigger world beyond just kendo and learns that maybe, just maybe, Fuji is exactly what she needs to become stronger. The story is rife with addlebrained characters, including a Wild Child of a senpai, an over-protective childhood friend, some characters' families and then some.