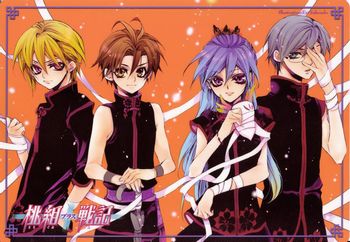 The Momotaro and his harem-err, his animal companions.note From left to right: The Monkey, The Momotarou himself, The Pheasant, and The Dog.
Advertisement:

Momogumi Plus Senki dishes out the adventure of the cute protagonist Yuuki Momozono, the reincarnation of Momotaro in Aitan Academy to break the curse of his body before he turns 17, or else, he's finished with the reincarnations of his animal companions, against the onis who cursed him in his previous life. It was started serialized in Asuka in 2006, by the author Eri Sakondou.