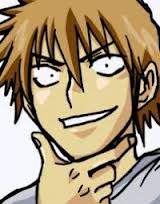 Surprisingly enough, he isn't a Molester.

Molester Man is a doujinshi that is mostly from the point of view of a university student who calls himself Molester Man. The premise is that by a series of misunderstandings Molester Man was mistaken as a stalker and Hilarity Ensues. The story has a serious side too; its essence is the classic Rags to Riches plot being driven by romance. As implied by the story's plot, the reader sees Molester Man grow as a person and gradually move towards a happier state of being.

The doujinshi is based on a real story posted on 2ch in the VIP thread and adapted by Yokota Takuma (a.k.a YOKO) who was later also responsible for Bakatsun, Shuudan!, Straighten Up! Welcome to Shika High's Competitive Dance Club and the art in Onani Master Kurosawa. It has a somewhat unusual narrative as it's fairly common to have the majority of the chapters composed of texts.

There is a live action adaption of Molester Man; the link to it is here

although it's only available in Japanese as of January 2nd 2013.