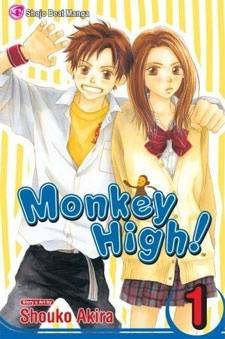 Haruna Aizawa knows just how far someone can fall - her father was a rising political star until he was arrested on corruption charges. Among the fallout from this was being forced to transfer from her expensive private high school to raucous Kita High, which in her cynicism she sees as a monkey troop on a mountain, constantly struggling to be on top.

And that's before she meets Masaru Yamashita, or Macharu to everyone else. He's carefree, goofs around, and even resembles a baby monkey to everyone. He's also the only one who reaches out to Haruna, at first - while others are put off by her aloof personality, he keeps trying to connect with her.

While nobody else can quite understand it, she ends up falling for him.

Known as Saruyama! in Japan, by Shouko Akira. The manga ran from 2004 to 2008, starting out in Deracomi before moving to Betsucomi in 2005.