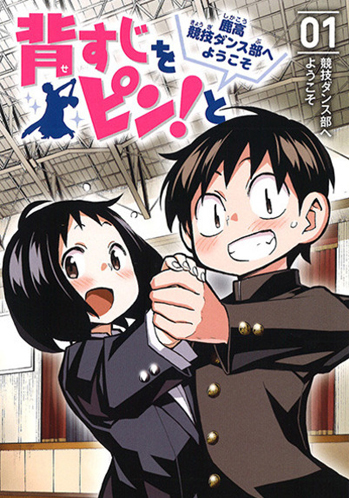 Masaharu Tsuchiya has just become a freshman in high school and he’s looking to make a change in his life. He wants to be more active and more involved in school life, since the only club he was a part of in middle school he just coasted through. He’d also like to get over his lack of social skills when it comes to women. However, in his future, he’ll soon be tossed into a strange and magical world full of dancing after he witnesses his school’s competitive dance club in action…

Straighten Up! Welcome to Shika High's Competitive Dance Club (originally Seshiji o Pin! to - Shikakou Kyougi Dance-bu e Youkoso or 背すじをピン!と ～鹿高競技ダンス部へようこそ～) is a manga serialized in Shonen Jump, written and illustrated by Takuma Yokota (the artist behind Onani Master Kurosawa and The Story Between a Dumb Prefect and a High School Girl with an Inappropriate Skirt Length). The series ran from 2015 to 2017, for a total of 86 chapters.

The series shares a setting with Shudan!, the author's next work published by Jump.

Not to be confused with the monthly manga Welcome to the Ballroom.