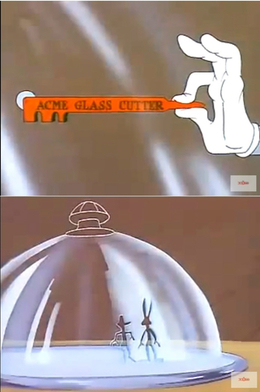 They ain't all round holes, doc.
Advertisement:

When a character has to get through glass, they cut out a perfect, round hole while leaving the rest of the panel untouched. It's a stealthier, quiet alternative to smashing the glass. It creates a larger opening than drilling a hole would, at least large enough that the character can reach inside.

If the person breaking in is prepared, they will have a device specifically designed for this purpose. It's a suction cup with an attached lever, with a cutting element — such as a diamond or laser - on the end of the lever. The suction cup is applied to the glass, then the lever is moved around in a circular motion, cutting a circular area out of the glass.

If a character doesn't have such a device, they will improvise by using the sharp point of a diamond ring instead. Another common variation is the use of sharp claws, in which case the circle is cut freehand.

A Phantom Thief or spy might use this method during a heist. The character need not be a professional (or amateur) burglar, but their intent is stealth-based.

In real life, this is not possible. MythBusters tested and busted it during one of the "Crimes and MythDemeanors" episodes. To cut out a circle, a glass cutter puts an even scratch (or score) on the glass. In order to get a controlled break along the score, force needs to be applied on both sides of the glass. If a burglar could reach the other side, they wouldn't need to cut a hole. The laser examples do escape those problems but run into the logistics of how much juice a laser needs to be strong enough to cut glass or how they don't overdo it.