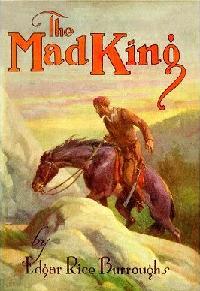 The Mad King is an adventure novel by Edgar Rice Burroughs. Originally serialized in two halves in All-Story Weekly magazine in 1914 and 1915, and first published in book form in 1926.
Advertisement:

Barney Custer of Beatrice, Nebraska, U.S.A, decides to visit Lutha, the small European kingdom that was his mother's homeland. The current monarch, King Leopold, has been kept imprisoned for years by his scheming uncle, Prince Peter, who has put it about that he is insane, but breaks free from his imprisonment around the same time Barney arrives. Coincidentally, the two men bear a strong physical resemblance; confusion, hilarity, and adventure ensue.

(The Prisoner of Zenda? No, never heard of it. Why do you ask?)