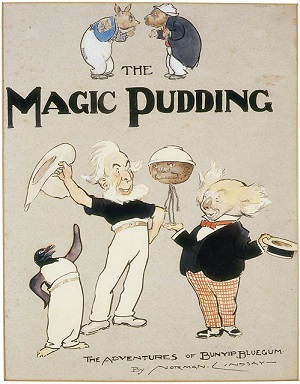 A much-loved piece of Australian children's literature, written by Norman Lindsay in the early 1900s (it was published in 1918).

Bunyip Bluegum the koala lives with his uncle Wattleberry in a small treehouse, a lifestyle he rather enjoys, except for one thing: his uncle's tremendous beard makes things a terrible hassle, and his uncle won't hear a word of trimming it off. Sick of having to eat his soup outside (which is terribly drafty, and lizards come and beg soup off of him), Bunyip resolves to set off into the world. Pausing only due to being stuck on whether to be a traveller (and keep all his belongings in a bag) or a swagman (And lug around a swag), a quick visit to a friendly poet clarifies he has neither bag nor swag, so he should instead become a "gentleman of leisure" and make his way in the world with nothing but his wits, a stout walking stick, and a polite attitude, Bunyip then sets off.

Unfortunately, in his haste, he forgets to take some provisions, and soon finds lunchtime upon him whilst being ravenously hungry. As he continues travelling, he meets a crusty old sailor and a penguin having lunch, and he politely tries to subtly invite himself to the meal. To his great surprise, the food itself (a steak- and-kidney-pudding[pie]) suddenly growls at the sailor and the penguin to let him sit down and enjoy some of it. Introducing themselves as Bill Barnacle and Sam Sawnoff, they allow him to sit down and eat. When lunch concludes, the new quartet begin travelling together, with Bill and Sam explaining that the pudding, or Albert, is a magical concoction created by, and subsequently "acquired" from, a former shipmate of theirs; a greedy Chinese cook (and part-time wizard) by the name of Curry and Rice. Their travels are interrupted by a sudden appearance of a shady wombat and equally shady possum; these, the sailor and the penguin explain, are "pudding thieves" who want to make off with their magic pudding, and Bunyip promptly offers to keep Albert contained and out of mischief while the two fight the thieves off.

Afterwards, in appreciation of what Bunyip did, Bill and Sam induct him into the "Noble Society of Pudding Owners", allowing him to continue travelling on together and sharing Albert's delicious sides. Bunyip eagerly accepts, though the pudding thieves come back and make off with Albert several times before everything is sorted out to a happy ending.