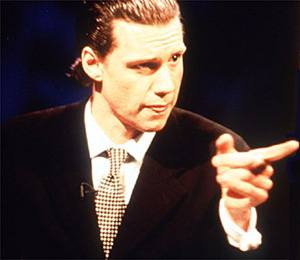 "You haven't got a clue, have you? But you will do if you watch for 30 minutes."
Advertisement:

After a second series of The Day Today failed to materialise and the team behind it went their separate ways, Chris Morris took Today's faux news format and a handful of characters and put his creative energy into making Brass Eye, an even more vicious and, as it would turn out, controversial satire of the Prime Time News format. The series not only deconstructed the way the news media told stories, it also made sharp jabs at topics — such as the British government's failure to improve the lot of the underprivileged, the negative effect that borstals have on young offenders, and the gullibility of celebrities when the promise of some good publicity is waved in their faces.

Dressing up in a number of disguises, Morris created a series of fake charities and good causes (such as "Nonce Sense", an anti-paedophile campaign), then asked celebrities and politicians to endorse them while reading out blatantly nonsensical rubbish ("Genetically, paedophiles have more in common with crabs than they do with you or me.") from an auto-cue.

The test was to see if anyone would sign up to these charities and spout whatever nonsense they were given without checking any of their facts first - and they did. In droves. In fact, it led to one Member of Parliament on the programme asking a question in the House of Commons about "Cake", a "metabolically bisturbile drug" that Morris had completely made up for the programme.

The result was outrage in some corners of the media and strong approval from the rest, who correctly pointed out that the celebs and MPs were given plenty of time to check the veracity of the charities and could have dropped out at any time. Morris also got in a spot of hot water when he inserted a subliminal message in a Brass Eye episode attacking the then current Channel 4 boss Michael Grade over edits he'd mandated in the episode, the words Grade Is A Cunt were displayed onscreen for a single frame

◊. The message (and the edits) were removed for later repeats and the DVD release.

Broadcast in 1997, the show lasted just one series of six episodes, but returned in 2001 with the Paedophile Special, which caused even more outrage, largely in conservative newspapers that misrepresented the show as being a "comedy about paedophiles" rather than a satire of the media's then-obsession with sensationalised paedophile stories. In one notable case The Daily Star published an article attacking the "paedophile comedy" opposite a photograph of then-15-year-old singer Charlotte Church

◊ in which it commended the size of her breasts. It's not a coincidence that the papers the show mocked were the ones that most got their knickers in a twist over it.

However, the series has gone down in British comedy history as a modern classic, and is widely regarded as Morris' best work.

Sample quote from the series: "If you plot 'number of animals abused' against 'what makes people cruel' versus 'intelligence of either party', the pattern is so unreadable that you might as well just draw a chain of fox heads on sticks. And if you do that, an interesting thing happens: the word 'cruel' starts flashing. So - are we cruel to hunt foxes?"