Literature / The Prisoner of Zenda 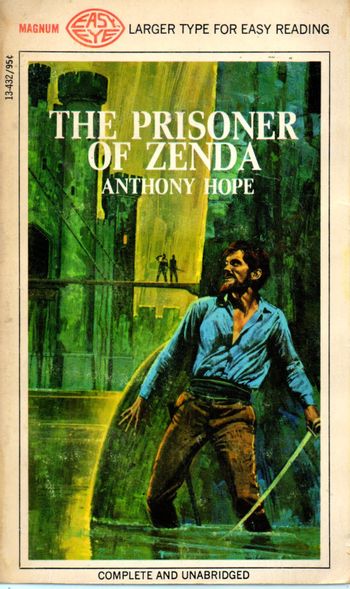 The Prisoner of Zenda is an adventure novel by Anthony Hope, published in 1894. The king of the fictional country of Ruritania is abducted on the eve of his coronation, and the hero, an English gentleman on holiday who fortuitously resembles the monarch due to being his distant cousin, is persuaded to act as his political decoy in an attempt to save the situation.

When Rudolf is forced to keep up the pretense for longer than a simple coronation, he finds himself having to deal with Duke Black Michael: the King's brother, kidnapper, and attempted usurper of the throne. He also becomes acquainted with Flavia, the King's beautiful young cousin... who suddenly finds herself more attracted to the ruler than ever before.

The book is responsible for many tropes on this site that are listed below. Likewise, it has been remade into several films, books and episodes of series since. It has an oft-forgotten sequel, Rupert of Hentzau, published in 1898, which has also (though more rarely) been adapted. Both books have a prequel, The Heart of Princess Osra, published in 1896, which is even more obscure and has never been adapted.

Not to be confused with The Legend of Zelda.

The Prisoner of Zenda features examples of:

Rupert of Hentzau features examples of:

The Heart Of Princess Osra features examples of:

Adaptations of The Prisoner of Zenda: