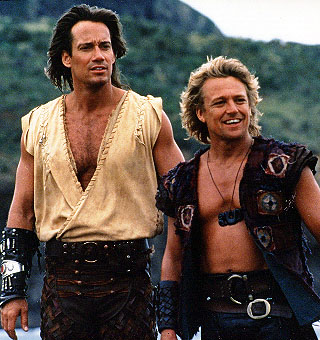 Herc and his li'l buddy Iolaus.
"This is the story of a time long ago, a time of myth and legend, when the ancient gods were petty and cruel, and they plagued mankind with suffering. Only one man dared to challenge their power: Hercules!
Hercules possessed a strength the world had never seen, a strength surpassed only by the power of his heart. He journeyed the Earth, battling the minions of his wicked stepmother Hera, the all-powerful queen of the gods.
Advertisement:
But wherever there was evil, whenever an innocent would suffer, there would be Hercules!"

Hercules: The Legendary Journeys followed the life of the legendary hero played by Kevin Sorbo throughout ancient Greece as he fought tyrants, monsters, and the machinations of the Olympian gods with the help of his trusty sidekick Iolaus. It never took itself too seriously, it started out cheesy and got campier and campier as it went on, but it retained a good sense of humor throughout its run (and it had a kickass theme song). Hercules was closely tied to its spinoff Xena: Warrior Princess, which soon overshadowed it in popularity. It also spawned another spinoff, Young Hercules, starring a young Ryan Gosling, which didn't fare quite as well.

The show began life as a series of TV movies as a part of Universal's syndicated Action Pack which proved successful enough to go on to a series (which had a good deal of cosmetic and thematic differences, the events of the movies were not referred to in the show proper), and being filmed in New Zealand gave it an unprecedented level of Scenery Porn that other shows couldn't manage. It put a new spin on Greek Mythology, deliberately avoiding the white togas normally associated with this time period. It was delightfully tongue-in-cheek (including a hearty serving of Anachronism Stew and lots of awful Puns) and impressively epic in its scope, using a lot of Wire Fu action sequences. It was also one of the first television series to make extensive use of CG creatures.

It was executive produced by Sam Raimi of Evil Dead fame, who would later go on to direct the Spider-Man Trilogy movies. Speaking of Evil Dead, Bruce Campbell directed a few episodes (Including the series finale), and played Autolycus. As an interesting note, the writing duo Alex Kurtzman and Roberto Orci got their start on this show, and have continued to complete a nerd trifecta of scripting movies for Mission: Impossible, Transformers, and Star Trek (2009).

Well, that's one way to win.

Well, that's one way to win.