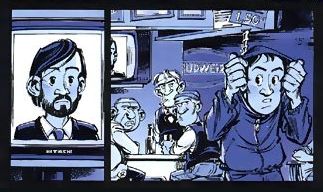 Escaping the law...by a hair.
"Do you know what this [being exposed] means, Hobbes? We'll have to change our names, move to another state, grow a beard and shave it off, then start all over again! From now on, we're no longer Calvin and Hobbes!"
— Calvin, Calvin & Hobbes: The Series, "Calvin's Batman Adventure"
Advertisement:

A man who is on the run or otherwise trying not to be recognized will often grow a beard as part of his attempt at concealment. The inversion — where a heavily bearded character shaves for similar reasons — is also relatively common, doubling as an Important Haircut.

A sufficiently Crazy-Prepared character might grow a beard so that, sometime in the future, he'll be able to shave it off and go unrecognized - maybe this is the reason for the Beard of Evil?

If the character in hiding is ashamed of what he's done, it may also count as a Beard of Sorrow.

Wig, Dress, Accent is another variation on the theme as is Dye or Die.

Not to be confused with Growing the Beard, which is figurative instead of literally growing a beard.