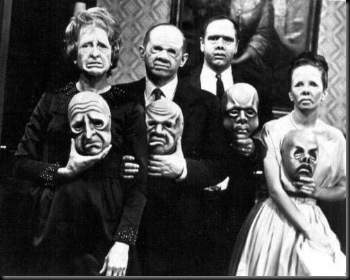 L - R: Emily, Wilfred, Wilfred Jr., and Paula after receiving some karmic justice.
Witch: Taint of mutant, scum of pond, thou shall become the guise thou donned!
Carl: [confused] Speak English, moron!
Witch: [exasperated] I'm turning you into your costumes.
Homer: Well, are ya gonna talk about it or are you gonna do it? [zapped]
— The Simpsons
Advertisement:

It's All Hallows' Eve (usually) and the kids are trick-or-treating and everything is normal, but something magical is afoot, and turns people into whatever costume they are wearing. If you're dressed up as a werewolf, for example, you'll become an actual werewolf.

You'd be surprised just how often this happens in fiction.

Not to be confused with Becoming the Mask or Evil Costume Switch. Can overlap with The Mind Is a Plaything of the Body, which is bad news. Related to Evil Mask. Hilarity might ensue if overlapped with For Halloween, I Am Going as Myself.

May be the subject of a Halloween Episode.

A witch curses the townspeople. "Good luck getting your deposits back on those costumes!"

A witch curses the townspeople. "Good luck getting your deposits back on those costumes!"