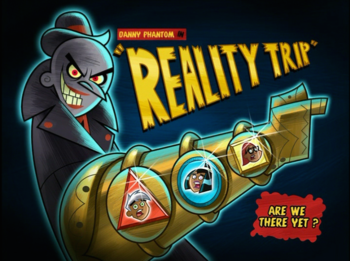 When summer vacation finally begins, Danny looks forward to a break from ghost fighting while going on a road trip with Sam and Tucker. Unfortunately, his plans are derailed when Freakshow returns, armed with the all-powerful Reality Gauntlet. In the ensuing battle, Freakshow loses the gems that power that gauntlet while Danny loses his Secret Identity when he accidentally turns back human on national television. To make the situation worse, Freakshow kidnaps Danny, Sam, and Tucker's families to force them to recover the gauntlet's gems. With the Guys in White hot on their tails and the whole world knowing Danny's secret, the trio must go on their planned cross country trip to find the Reality Gems and stop Freakshow in order to get their lives back to normal.

Tropes found in this episode: