For those who only played the English version, beware of unmarked spoilers from the Japanese version! 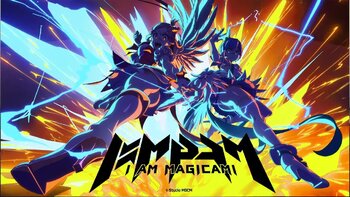 "Do you believe in infinite possibilities?", now with more epicness!!
Advertisement:

When Pretty Cure meets Persona, The Girl In Twilight, Magical Girl Raising Project, Promare, Muse Dash and Summoners War: Sky Arena and some male tilitating-fanservice and a multiverse mind-screwiness are thrown in.

"I=MGCM", or I AM MAGICAMI(read: “Ai-Em-Ma-Jhee-Ka-Mee”), is a Japanese indie Science Urban Fantasy Turn-Based Strategy Magical Girl game by Studio MGCM, which was released in 26th June 2019 on PC and 11th June 2020 on smartphones. The English version was released on 1st September 2020 on Nutaku and Johren. Play the regular Japanese version here

and the English version here

Ordinary High-School Student Tobio Hakari wakes up from a strange Nightmare Sequence and finds himself in a weird version of his own room located in the middle of a vast mirror-like plane, unable to remember anything about how he came to be there. He's greeted by Kamisaman, a mysterious bossy girl whom he saw screaming for help in his nightmare, who states she owns this place and offers him to become an "Executor". Kamisaman explains that the world is in great danger from human-devouring demons who have appeared on Earth and are hunting people, causing an epidemic of "mysterious disappearances”. They invade the world through zones of distorted reality called "fluxes" that entrap people who enter yet are invisible to normal humans; the demons' victims are not merely killed, but completely Ret-Gone.

The only thing that can stop the demons' onslaught are magical girls, who can see and enter the fluxes and destroy demons with their powers; when a demon is killed, all the people whom it had caught are restored to the world as if nothing happened to them. Kamisaman can empower girls with potential to become such using Dynamisphere, an impressively multi-purpose smartphone app she had created and installed onto all new phones; prospective magical girls are identified and offered their chance by the app. However, Kamisaman needs someone to directly oversee and guide the magical girls in the field, and that's where the Executors come in.

Before Tobio can ask why and how he ended up here saddled with this knowledge, as if on cue, Kamisaman reveals that two prospective magical girls are about to be attacked by a demon and are doomed without Tobio's intervention. He cannot go to help them directly, but he can still interact with the world as we know it using a proxy avatar in the shape of a blob-like cat-eared Mentor Mascot called Omnis, controlled from a likeness of his computer. Unable to bear leaving innocent girls to die, Tobio readily accepts this mission, becomes an Executor and, armed with instructions on how to awaken the girls' potential, rushes to their aid, unaware of just how deep this rabbit hole can go...

Will the girls be able to save the world and discover their 'infinite possibilities'?

Not to be confused with a French supply chain institute.

See Noein, The Girl In Twilight and Murasakiiro no Qualia for similar mind-screwy concepts; compare Senran Kagura, a broadly similar franchise but themed around ninjas.

This game was previously named MGCM. But Studio MGCM announces the rename to I=MGCM (also known as I AM MAGICAMI) on 23rd June 2021, with more in-game features and main story expansions.

See the character page for a much more detailed breakdown of tropes as they apply individually to the game's cast!

Editor's note: There's an official NSFW version of the game called I=MGCM DX. However, this version of the game has sexually explicit content, which we cannot discuss in detail due to our Content Policy and No Lewdness, No Prudishness policy. Please use only the broadest and most general of references when listing examples that cannot do without taking features from that version into account.