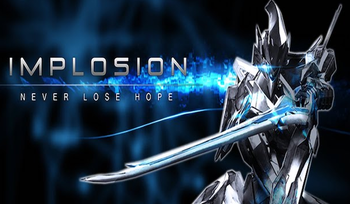 Implosion: Never Lose Hope is a Beat 'em Up for IOS and Android devices released in 2014 by Rayark Games, the developer of rhythm games Cytus and Deemo. A Nintendo Switch port was released later, in 2017.
Advertisement:

The game takes place late in the twenty-second century, twenty years after Earth has fallen to alien invaders named the XADA. Now humanity's new home planet, Gaia, is facing a similar attack that is being orchestrated by the XADA from Earth. You play as Jake Carloway, an Earth refugee and pilot for the Ivonix corporation who controls a WarMech III battle suit codenamed Avalon via a Brain/Computer Interface. If the WarMech gets destroyed, you die with it, because your mind has been downloaded inside. While Avalon's primary weapon is a BFS Sharpened to a Single Atom, you can also use ranged weapons to get the job done. Your goal is to search Earth for the XADA invasion signal and shut it down before Gaia also falls. During your journey you'll also find modules known as ARKs that will upgrade your WarMech.

Available on Google Play, the Apple App Store, and the Nintendo eShop. The official Rayark Games site can be found here