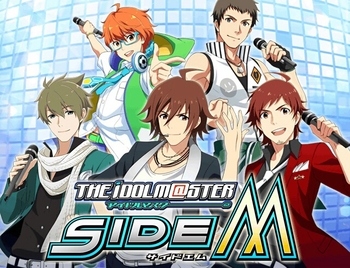 THE iDOLM@STER: SideM is the third mobile game spinoff for the ever-popular The iDOLM@STER series. First released to the mobile game platform Mobage on February 7, 2014, the game had some technical difficulties and had to be temporarily shut down. It was put back up on July 17, 2014, then later released in April 2015 to Android phones and May to iOS.
Advertisement:

What sets this game apart is its surprising subject matter — rather than the cute girls and beautiful ladies of the previous installments, SideM focuses entirely on producing male idols. A playable total of 37 idols was initially included in the game, along with the noteworthy return of previous male idols Jupiter of The iDOLM@STER 2 and Ryo Akizuki of Dearly Stars. Like its sister series Cinderella Girls, the game follows a digital card game format with idols and events taking the form of trainable cards.

The series also has several spinoff titles in manga form; in addition to several comic anthologies, they have Dramatic Stage, focusing on DRAMATIC STARS and High×Joker; Struggle Heart, focusing on Beit and THE Kogado; and Wake Atte Mini!, which is a chibi Yonkoma.

In October 2017, the series received its own adaptation to air in the Fall 2017 anime season, and an adaptation of Wakeatte Mini! in 2018. Within the same timeframe as the former, it got a Rhythm Game spinoff of its own: THE iDOLM@STER: SideM: Live on St@ge!, featuring all idols present to date in the game and debuting Jupiter's new outfits. LoS ended its run in 2021, after 3 years of service.

At the series' 2021 PRODUCER MEETING event, the replacement game for LoS, GROWING STARS, was revealed. Further information about the game was released on June 9, 2021, where Bandai Namco would reveal a return to 2D sprite work and a completely new idol group, C.FIRST.

A stage play focusing on GROWING STARS was announced for a June 2022 release.

Year 4 (Fists of Faith) Genbu comments on his improved tea pouring skills and butler gig from the Elegant Days with Butlers event, while Suzaku gets to throw on his costume from the Bakumatsu Shining Star Record event; meanwhile, Ren has his basketball that his "Graduation" character had, Taiga is featured in the shirt that he wore during the Bullets of Heresy event and the stage he points out to the Producer was from the Fresh Green Live event, complete with a recreation of the dance shown on his card; Michiru brings up the Sengoku Movie Village event.
(Supportive Friends) Shiro's mask was from the White Fox Dance Festival event, Nao's card has him in front of a fast food restaurant referencing the 315DINER event, and Kanon's bunny hood comes from the Sleepover Gacha. Rei carries one of his remaining fliers from the Green Record concert from the First Live event, while Kei somewhat recreates his SR+ from the 2015 Paradise Resort event.Year 5 (Aiming for the Top) Touma's card features him in a hoodie against a summer sunset, referencing the Sunshine Live event and Jupiter's first main event in the game. Shouta has a flashlight, calling back to the Short Circuit Happening gacha. Hokuto is shown with a wine bottle, referencing the Drinking Grape Drops event. Yusuke is shown against a backdrop of stars and posing for the camera with an outstretched hand, referencing the Tears of a Binary Star event and card pose for it. Kyousuke meanwhile is shown with a trophy, referencing the 2016 Idol TV! Athletic Meet event.
(Principles of Bonds) Sora holds the scepter he has in the ICE KINGDOM LIVE event, Amehiko stands behind a harvest moon, referencing the Flower Sign Dance Festival, and Chris is holding an aquarium brochure from the one that inspired him to be an idol in the first place the Aquarium Live. Meanwhile, Daigo is featured with his Smiles After the Rain parasol, Kazuki has on the blue scarf he wore in the Traditional Craft-Making Team event, and Ryo is on a cruise ship like he was in the Dream Boat Party Live.Year 6 (Within This Heart-Pounding Moment) Kyoji poses as his Cybernetics Wars character does in its first event, Pierre gets back his puppet from the "Waltz with Puppets" event, and Minori visits a melon-themed sweets shop referencing the Melon Fair Live. Meanwhile, Teru holds a figurine of his character from the Sentai DraStars production, Kaoru is pictured by the water fountain he ran past in his Fresh Green Live SR card, and Tsubasa is holding the charms he got from the 2016 New Year Festival Live.
(Sedulous Steps Forward) Jiro finds the brand of popsicles he used for the photoshoot in "ICE MEMORY", Rui is holding one of the movies he used for reference in "GHOST SNIPERS!", and Michio wears the armband he has in his ouendan stint for the "Osu! Idol Cheering Squad" event. On Sai's side, Kuro finds the tickets he got from the "Genpei Chronicles" event, Shoma poses with the perfume he was hired to advertise in "Cosmetic Tonight", and Kirio's fan and pose references his role in the "Three Kingdoms Chronicles" event.

Live on St@ge! provides examples of: