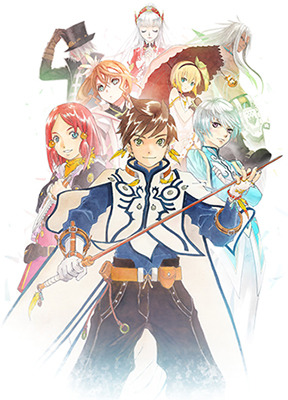 "The legends are no mere fairy tales!"
Advertisement:

The 15th Tales Mothership Title, released for the Playstation 3, Playstation 4 and PC. It marks the franchise's 20th Anniversary. The word "zest" in the title means "passion" or "zeal."

Legends tell of a race of divine beings known as Seraphim, whose unseen influence is felt throughout the world. Those humans with the ability to commune with the Seraphim became known as "Shepherds", the most pure-hearted of which could even be granted a Seraph's power. While some would praise these empowered Shepherds as living paragons, others would fear their strength and call them demons.

Sorey is a young human who has spent his entire life in the village of Elysia, a holy place where he lives in harmony with many Seraphim. Enraptured by the legends within an ancient tome, he makes daily excursions into a nearby ruin with his childhood friend Mikleo, a seraph himself, in the hope of learning more about the Seraphim and their history.

One day, the two boys encounter a human knight named Alisha, who is investigating a series of natural disasters which have been plaguing the world. Upon hearing her tales of the outside world, and her belief in the legend of a Shepherd who will save it, Sorey becomes interested in leaving Elysia to see for himself. However shortly after Alisha begins her journey home, an Ax-Crazy Hellion attacks Elysia and reveals his intentions to devour Alisha before heading after her. Sorey and Mikleo decide to leave Elysia so they can warn Alisha, while also experiencing the world for themselves and pursuing their dream of a future where Seraphim and humans can walk hand-in-hand once again.

The game was released in Japan for the PS3 in January 2015, and later in the NA and PAL regions for the PS3, PS4, and PC in October 2015. An anime special covering the beginning of the story was made to promote the game, with a full (but very loose) anime adaptation (Tales of Zestiria the X [cross]) later greenlit. It is followed by Tales of Berseria, a Prequel which takes place in the distant past of Zestiria's world.