Video Game / Tail of the Sun 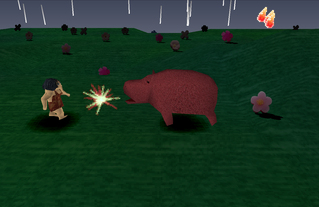 One of our protagonists, fighting a hippo.

Tail of the Sun is a quirky, artsy caveman simulator released in 1996 for the PlayStation. It was developed by Artdink (A-Train, No One Can Stop Mr. Domino) and directed by Kazutoshi Iida (Doshin the Giant).

The ultimate goal of the game is to build a ladder to the sun using mammoth tusks. In order to achieve this goal, the cavemen must explore and gather resources in a large open world, and hopefully grow their tribe's cultural and physical levels enough to hunt the fearsome mammoths.

The cavemen also have an infamous tendency to fall asleep at the worst possible times.

Tail of the Sun provides examples of: